The Road is Always Greener 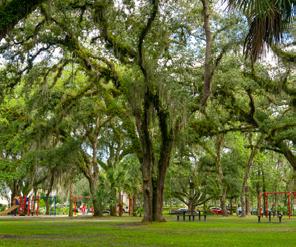 Why traditional neighborhoods emphasize connection and accessibility, and how their use of streets and parks make for a more connected, successful community.

To reiterate a prior concept, “context-based” street design is an approach which proposes that streets can and should answer to the varied needs of a certain area, whether institutional, residential, or commercial—and the streets of traditional neighborhood developments do just that. Typically, this design model includes organized blocks, alleys, and patterns which, with the help of public spaces, foster a flexible transmission of foot, bicycle, and automobile traffic. To contrast, conventional suburban developments often feature large blocks and low-traffic local streets that feed into streets with higher levels of traffic, which then lead to streets with consistent speeds and traffic volume. In other words, conventional suburban developments are ultimately dominated by the automobile with less regard to pedestrians.

On the other hand, traditional neighborhood developments are, again, extremely supportive of multiple modes of transport and also emphasize smaller blocks to increase walkability and create a network of streets, allowing for multiple routes of transport. This, again, ties into the mixed-use aesthetic of traditional neighborhoods: multi- and single-family homes are blended with apartment and townhome living, which generates a natural buffer for traffic and is further maintained by generally lower speed limits for motor vehicles. This aids in constructing safer spaces for pedestrians and bicyclists, and the organized network of streets and blocks renders it easy and accessible for residents to find their way around the neighborhood.

As we have examined in these articles, the many facets of traditional neighborhood developments must work in conjunction with one another in order to exist. Just as parks and open spaces rely on context-based street design, so too does street design depend on the existence of parks and open spaces. Like mixed-use spaces and combinations of different sizes and types of living arrangements serve to buffer traffic, large, often circular fields of grass are utilized for the same reason: automobile drivers must slow down and become mindful of the roundabouts that permit the flow of automobiles in one direction, which effectively and naturally mitigates traffic. This, however, is just one use of open spaces and parks in traditional neighborhood developments. Parks and open spaces can act to establish the perimeter of traditional neighborhood developments in order to disconnect neighboring areas that might consist of different land uses, and they can also be utilized for gathering or recreational purposes. As an example, the presence of a park or open outdoor space, sometimes including a lake, in the heart of a pedestrian shopping center allows for things like relaxing, fishing, and holding events that promote business for surrounding shops and restaurants. And like street trees work to reduce visual pollution, parks and green spaces afford visual breaks from the architecture of a built environment. Public social interaction is essential to building a strong community, and parks provide the space to do that, unlike conventional suburban developments whose majority of parks and outdoor spaces are composed of fenced-in backyards, where there is little opportunity or chance for social interaction.

Overall, it is clear the ways in which street design influences public spaces, just as public spaces influence street design. Traditional neighborhoods do much to create synergies between elements, displaying a true concern for their residents’ needs rather than focusing on the influence of the automobile as conventional suburban developments do.

Whether you are enjoying one of the large quarterly festivals or relaxing in the park at one of the monthly movies, the community is full of life and a variety of family-friendly activities.