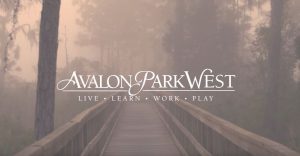 Wesley Chapel, FL – May 12, 2017 – The Telly Awards have named NG Production Films as a winner in the 38th Annual Telly Awards for their piece titled Avalon Park West.   With over 13,000 entries from all 50 states and numerous countries, this is truly an honor.

The Avalon Park West video showcases the Wesley Chapel, Florida new development master planned community. Avalon Park West adds to its small-town charm with neighborhood parks, tree-lined streets, garages accessible from private rear lanes and wide front porches that enhance the pedestrian-friendly character of the neighborhoods. At the heart of the community, Avalon Park West’s Downtown will bring convenience home with necessities like a medical center, schools, day care, dining and shopping all within only a short distance of home.

Avalon Park West is honored to have their community video nominated and chosen as a winner for the prestigious Telly Award. The Telly Award was founded in 1979 and is the premier award honoring outstanding local, regional, and cable TV commercials and programs, the finest video and film productions, and online commercials, video and films.  Winners represent the best work of the most respected advertising agencies, production companies, television stations, cable operators, and corporate video departments in the world.

A prestigious judging panel of over 500 accomplished industry professionals, each a past winner of a Telly and a member of The Silver Telly Council, judged the competition, upholding the historical standard of excellence that Telly represents.  The Silver Council evaluated entries to recognize distinction in creative work – entries do not compete against each other – rather entries are judged against a high standard of merit.

“The Telly Awards has a mission to honor the very best in film and video,” said Linda Day, Executive Director of the Telly Awards.  “Avalon Park West and NG Production Films accomplishment illustrates their creativity, skill, and dedication to their craft and serves as a testament to great film and video production.”

“At Avalon Park West, we are excited and honored to be given this wonderful award. We are happy to say the video is a national award winning piece crafted with the partnership of NG Production Films who have executed our vision beautifully” said AnaLee Rodriguez, Marketing Manager at Avalon Park West.

To find out more about the Telly Awards visit our website at www.tellyawards.com.

Whether you are enjoying one of the large quarterly festivals or relaxing in the park at one of the monthly movies, the community is full of life and a variety of family-friendly activities.